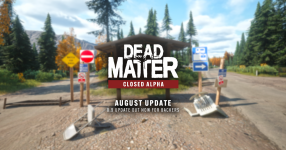 Today our Closed Alpha Update 0.9 goes out to our backers. This update hits a few big milestones for the development of Dead Matter, and you can learn more about them by reading our previous blog. Today’s monthly blog will go over the changelog for 0.9.

As of 11:30 AM (MST) on August 29th, 2022, Closed Alpha Update 0.9 will be available for all Closed Alpha backers. Please ensure you have deselected any branches in the betas menu and allow Steam to update the game.

Before we get into the changelog, we want to stress several points that will make your testing more effective.


We will be paying close attention to bug reports and crashes this week, so get your bug reports sent in as soon as possible. We will be monitoring our server for game-blocking bugs. You can expect a hotfix to address any serious problems we encounter.


Thank you for participating in or following our Closed Alpha. Your feedback helps us more than you could ever imagine.


Alright, have some fun in Dead Matter this week.

Oh, we will be back at the end of September with another development update to give you a peak into 0.10.
Last edited: Aug 29, 2022
Click to expand...